When I have had it, and in my mind, I am packing my bags….Paris flirts. The temperature is rising and i look a bit like a viking wearing a T-shirt in a snow storm. My legs are such a horrible blueish shade of white i felt compelled to torture the Parisians by showing them sunlight in hopes of a tan.

Since we have the magic book, i have spent a great many number of hours pursuing more means of masochism by investigating Social Security. This would be the French one, not US. It seems that as the wife of a citizen, i have a right to the Medical care they offer here and coverage on prescriptions and so forth which would allow me to cancel the overseas policy i am carrying.

You see where this is going don’t you? Gloria seems to be an old hand at this, so she offered to take me. Little did she know that I carry my own black cloud just for government office and we left with a new list of documents needed.

It seems that my birth certificate is lacking. I was supposed to apply for an Apostille. This is a document that verifies that the the document you are presenting is real. Since i didn’t get one before i left, i needed to send my original birth certificate to Sacramento with a letter explaining why i needed it and for what country and money of course. Oh and a self addressed envelope.

With that in the mail, i also was able to find thru the embassy a list of traductors that will translate the birth certificate because the stamp isn’t enough. Seems a little redundant, but my American friend also went thru this and went a different path and i figure ill do both because it one turns me down, i have the other to hope for and save a little time.

The tribunal who told us the Prefecture was wrong sending us to them, and redirected us back. It felt like a victory making it past the screener to a section of seats where we waited for our number to be called.

One step forward two back or something like that, because the luck ran out and at the clerk informed us that I needed to come back in May to register under the spousal status to renew my visa to stay longer. My Visa is good till July technically, but they will start to work on renewals 2 months earlier.

I had Claude translate that i need to switch it now to allow me to work. He then told us about the OFII office and how they had a magic stamp. I had already sent that application in, but we decided to keep rolling while we were still motivated.

The Office of Immigration and Integration was a much smaller version of Ellis island, and I stuck out having the palest skin. I wore pants not to blind them. After pushing and shoving when the office reopened, the managed to wrangle all the people with papers proving they had appointments into the building and informed Claude that tomorrow would be “American” Day and to return then.

We did stay there for long enough to hear them repeat a number of things they were not going to allow. Therefore the following day I went to the office alone, since you were not allowed to bring anyone else in with you. I understand this. I wasn’t let in the US embassy either, they had a help desk in the driveway after x-ray machines.

Having no car, getting there took an hour and i was trying to be early to be closer to the door when they opened, but the bus stop i went to had no time sheet to say when the bus would come, and i waited 15 min.

After 3 hours of standing in the cold parking lot, I was allowed in, and didn’t have to say a word since the remembered me. I mean, you would remember an alien if they came to your office, right? Not an illegal one, but a green one. Yes, I really do stand out. I have been going to the offices that are in the area I live. Not in Paris proper. I live on the edge of the city, and it has lower rent and so the snowball rolls.

After waiting another hour, they took my paper and smiled at my bad grammar and i was given a copy with some date stamp and pointed to the door. So now I anxiously wait for the list of documents they will send me that they require.

I love not having a car. It does take a little long to get places and i don’t mind too much although i don’t stay in Paris very late knowing it will be an hour to get home. Im sure if i took Uber it would be very fast, but the prices here are very high and no job, means i need to be careful wherever i can be. So, lets see, Uber or the great onion soup hunt? No, i still have not found the winner, but i continue to search.

I was rewarded for the OFII adventure with a lunch date. Claude was off and tickled that i need to go wait in line allowing him a little quiet time. When i returned we went to his Uncle Pepe and Aunt Marie who made us Paella. The real deal. 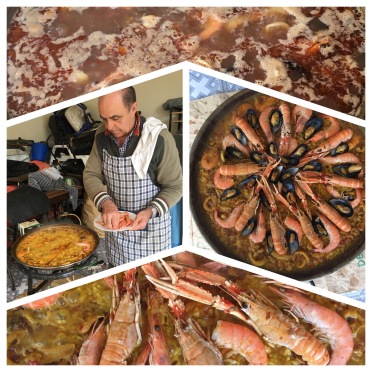 Finding strength and solidarity in my only American friend Tyler, and I shared the situation. We update each other on our struggles with French papers daily. He has just been PACS-ed. Basically it is Domestic partnership before Gay marriage was allowed. But it is still very popular and and with the non gay community, his wife is French and he shares my battles. He told me to get the PACS, he too needed an Aposille and sent me on a hunt which happily ended well.

Maybe the tide turned, but after requesting the translation of my birth certificate from a government approved translator, we returned to the City Hall and finally had a success. (4th try) Seems that in 10 days I will have a French  ID. My California ID was stolen 6 months ago, and it’s rare for me to carry my passport because it’s so valuable, and the only identification I have. It will be nice to be able to carry an ID again.

I’m sort of waiting for a call to say something went wrong. Partially cause I’m pessimistic and partially because we got a call for an additional paper when Claude got his ID. Either way it is farther than I have gotten in any office so far.With this translation of my Birth, I was able to go to the Chamber of Commerce where they stamped it to verify that it is legally translated. So now the paper has 2 stamps, seeing a pattern cause it gets better.

Then I went to the Tribunal and they gave me an Apostille stamp(number 3) that makes my birth certificate more legal?I don’t know why so many stamps but I followed the instructions given to me it seemed to work.

It’s such a weird and long process. Now we wait for the ID, after it comes  I’ll be eligible to get on Claude’s bank account.(3rd try now) Once I’m on that account I’ll be able to turn in my paperwork for Social Security. That process will take 2 months. At that point I’ll be able to cancel my insurance because I’ll be covered here. Funny thing is that after the Bell’s Palsy i was sent a hospital bill and without being covered i was forced to pay the entire bill myself. Im out $50. Um, yeah thats it, with Social Security it would have been free.

The interesting thing is that when I get my ID I will be able to turn in the papers to the same City Hall guy who will then process my application for a French passport. Not tat i am looking at becoming a citizen here, but if I do things are much easier. Its a Catch 22, because the US doesn’t support Dual citizenship, but they don’t stop it either. France doesn’t seem to care, so it may be the easiest way to get things done.

So this is interesting cause Claude says I’ll be a citizen at that point but I think that there is more too it, but I’m going with the flow cause I really don’t understand a thing about the government here hence the writing in hopes to help another American seeking a life abroad.

In the mean time I got a letter from OFII (Office of French immigration and Integration)and they have made an appointment for me for next week to have a physical. The week after they will meet with me to do lord knows what.

While I continue to work on Papers and language , I also managed to paint the living room, and what a difference clean walls make. We have been keeping things quiet but Claude received an offer from a new restaurant and he will go in next week for his paperwork. He has informed work and of course both sides are sad but he is here to see Paris and live life, and this offers a bit more of both.

He will be in a smaller Michelin stared Restaurant where he will be the head Sommelier. He is the 2nd in charge now so this is a step up on the resume. Also it will allow him to create his own scheduled. This will be helpful in regards to racing.

Despite the rain today, the weather is improving and we have gone out on the Tandem twice. We look forward to more. Now that the cat is out of the bag regarding his changes, he was requested to give Divellec a month notice by his new employer. They all know each other and want to be sure there are no hard feelings.
Spring has come to Paris and the pink petals of the cherry blossoms carpet the streets and finally things are rosey literally. I have been congratulated repeatedly for making thru the winter and know the battle is so much better in the sunshine. So the flirting with Paris continues because what girl can resit flowers?